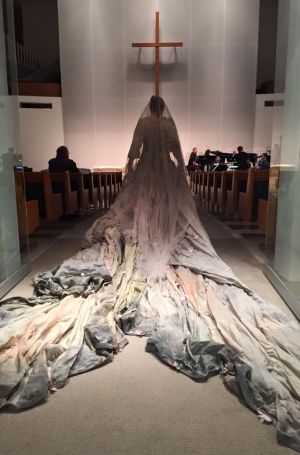 "Mezzo-soprano Buffy Baggott — which serendipitously rhymes with “Maggot” — put on a performance that can only be described as an overwhelming tour-de-force. Clad in a bedraggled wedding gown and train, occasionally reclining on a deliberately ratty-looking Victorian sofa, Baggott twisted her opulent voice into various loony states, drawing out the words, dominating yet not drowning out the clearly-etched chamber group led by Ryan Dudenbostel. Often, she made her character seem unbalanced and stark raving mad to a frightening degree."

“Anderson-Bazzoli employs a largely tonal approach, with varied musical characterizations… the work is very well crafted. It’s gracious for the voice and engaging for the piano. Mezzo-Soprano Buffy Baggott has a warm sound and elegant phrasing. She manages the varied challenges of the work seamlessly and without strain, allowing the poetry to speak its magic. Kevin North proves to be an alert and sensitive piano accompanist, never overshadowing the vocal line. This is a fine contribution to the art-song canon—one that should prove widely appealing for listeners.”

While Robinson Jeffers (1887–1962) is one of America’s most important 20th-century poets, relatively few composers have set his lean, emotive and enigmatic verses.Composer Christopher Anderson-Bazzoli, like Jeffers a Californian with deep ties to the Monterey-Carmel area, has met the challenge with his expansive song cycle Continent’s End. The work successfully captures nine poems in which Jeffers, in characteristic fashion, combined striking nature imagery with powerful metaphysical musings and depictions of humankind’s transitory, conflicted role in the planet’s future.Continent’s End is vividly brought to life on this recording by two outstanding performers who call the Bay Area home — mezzo-soprano Buffy Baggott and pianist Kevin Korth.

It would have been predictable to select a lower male voice to sing this music, but the surprising choice of mezzo-soprano Buffy Baggott yielded great results: her voice supple, strong at both ends of her wide range, generous in the middle register, and impressively powerful in the climactic moments of the music.

Warning: Unknown: Failed to write session data (files). Please verify that the current setting of session.save_path is correct (/home/bbmwhmcp/public_html/files/tmp) in Unknown on line 0